Guancaste is the province number 5 in the country of Costa Rica and Liberia is considered one of the main cities in the province of Guancaste. La Leona Waterfall is located 20min away from Liberia downtown and 30min away from the Liberia Guanacaste international airport (LIR).

How to get from Liberia to La Leona Waterfall?

To be honest there aren’t many options to get from Liberia to La Leona Waterfall, it’s either: You drive with your own car, arrange transportation with us directly or take the bus (the bus has only 2 schedules and that’s why it is not very reliable to depend on it) here are your options:

La Leona Waterfall is located in the small town of “Curubandé”, 20min outside of Liberia downtown. The Comapany that provides this bus service is called “TRANSBASA” 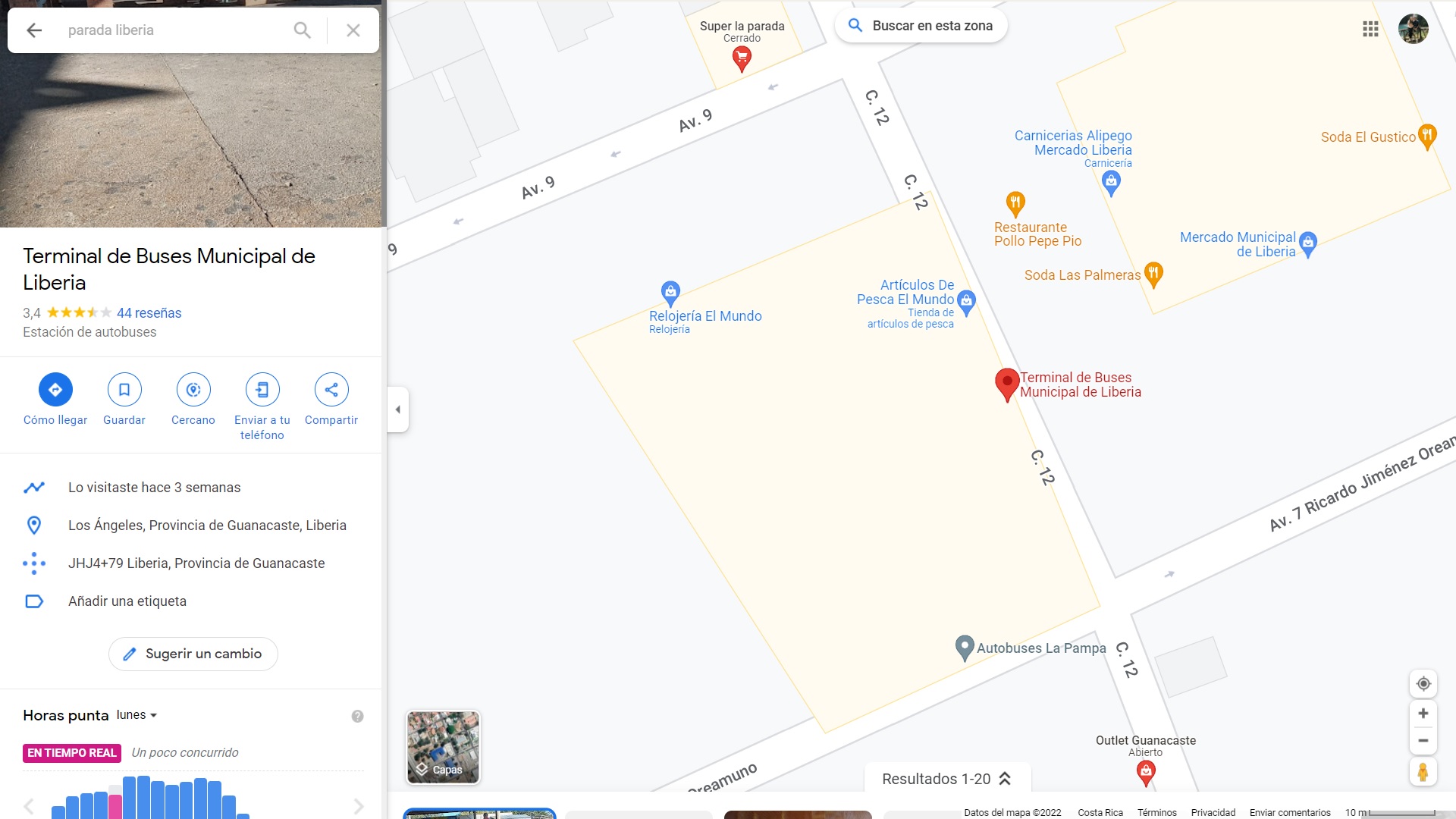 Now, the issue with the bus is that there are only two schedules: 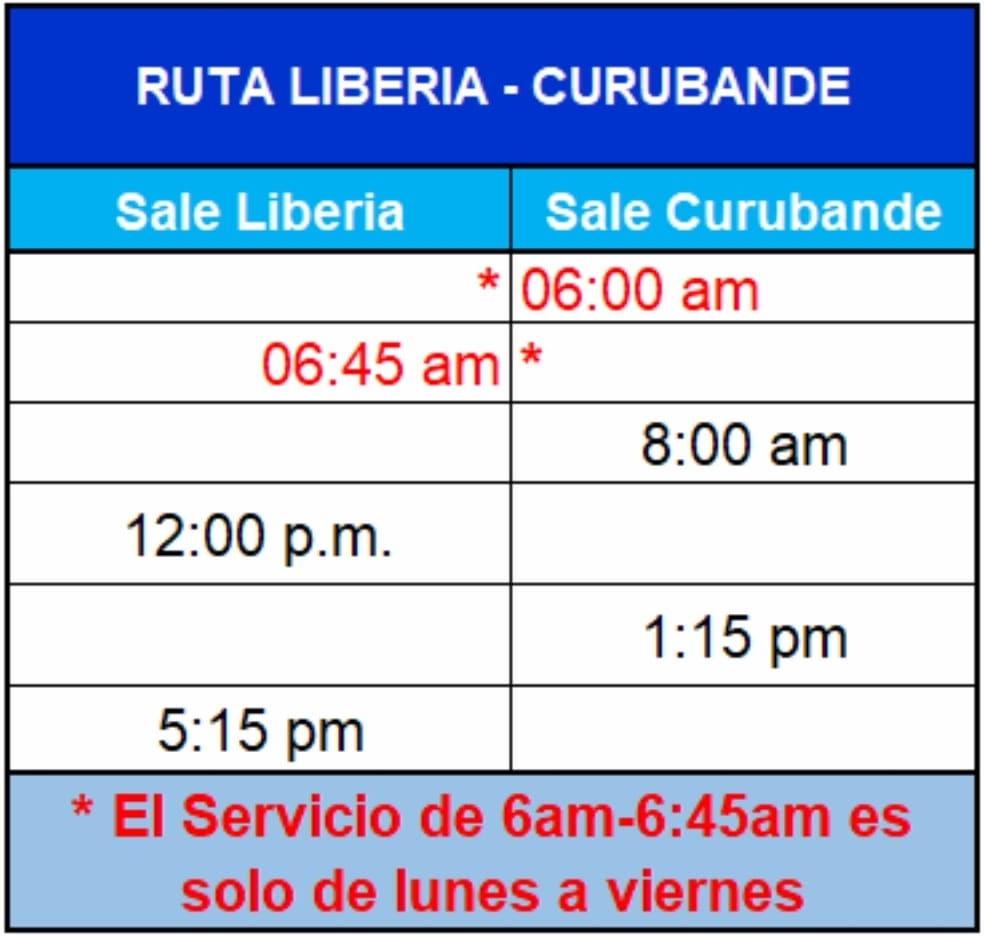 The times marked in red color means that the schedule only applies on week days, meaning that those times won’t be available on the weekends

As you see, the issue with the bus schedule is that it doesn’t give you many options to choose and you would have to either take the bus and wait in Curubandé but on the way back you might have to pay for a taxi in order to get back to Liberia because the last bus leaves from Curubandé to Liberia at 1:15pm.

Depending on how many people you have in your party you can choose to arrange a private car to do this service for you. Here with us we are able to send you a quote for round trip transportation from Liberia to La Leona Waterfall and back to Liberia.

Using the link above you can request a quote for transportation directly with us. 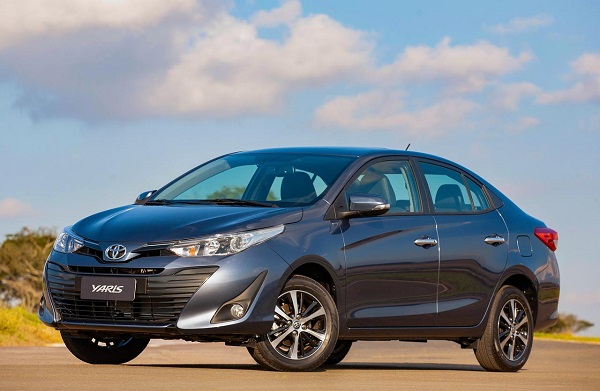 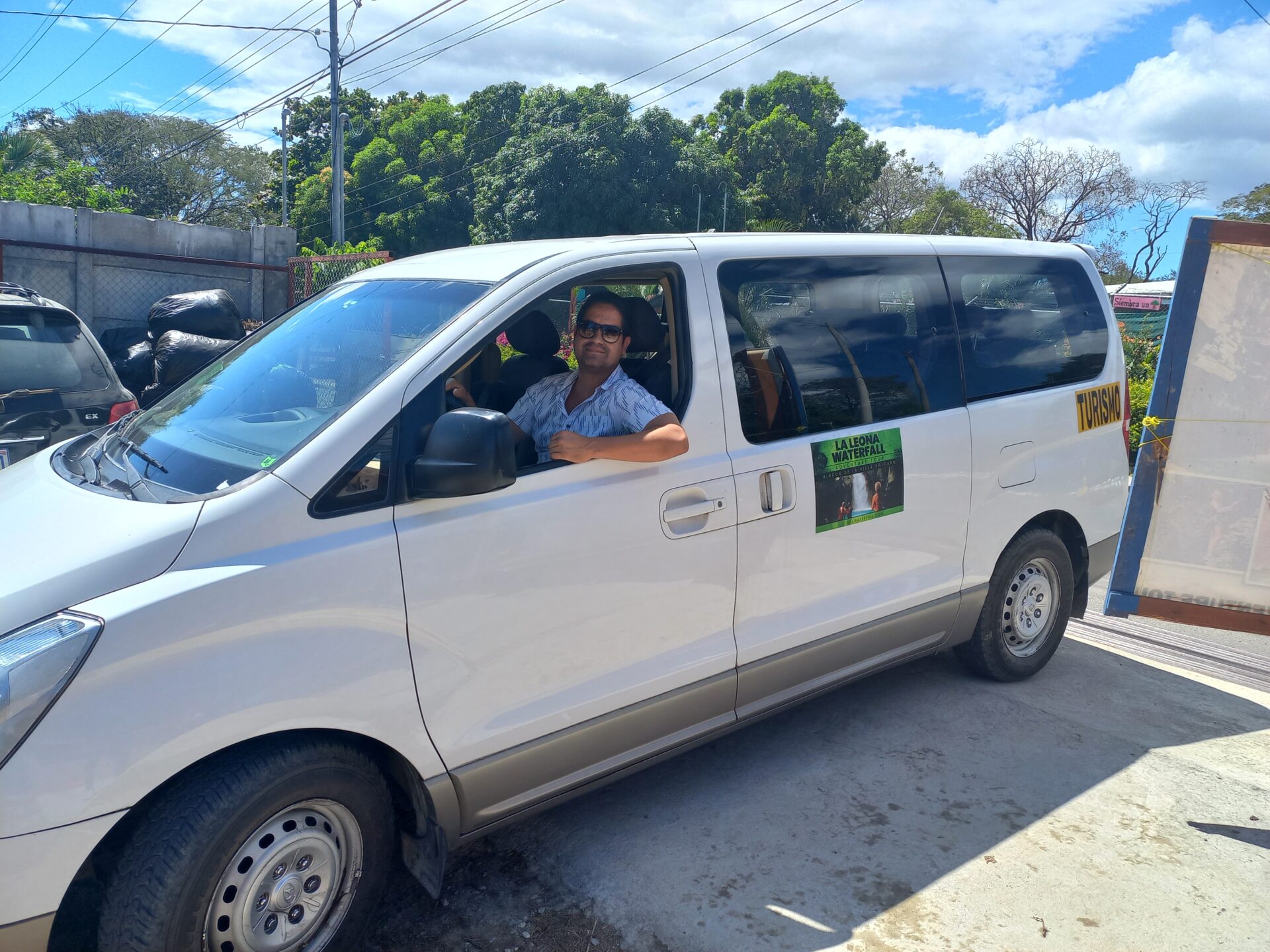 Request a Quote for Transportation to La Leona Waterfall

The road to get to the parking lot of La Leona Waterfall is perfectly paved and in good condition. You have to take the road heading towards Rincon de la Vieja National Park. You can find our exact location on Google Maps as: La Leona Waterfall Official – Catarata La Leona.  Now when looking for our location make sure it is the one with over 200 hundred reviews on Google Maps. There are many locations on Google Maps to get to La Leona Waterfall… here is what happens, many people in the town have created locations to their parking with the name of the waterfall, some of them do tours ilegally, meaning they are not insured and use unauthorized trails to do the tour. When booking a tour make sure you book with the best and that’s us… We guarantee you this and we have a lot of reviews from previous customers to back it up.

As I mentioned it before, we have a lot of reviews and you should take the time to read them yourself, these are real stories from real families who have had a blast with our staff and our company La Leona Waterfall Adventure Tour.

Elizabeth F
Verified
La Leona Waterfall Excursion Our guide Ian went above and beyond in terms of knowledge, safety, kindness, and patience. We had an absolutely amazing adventure with him leading us across the Rio Blanco, up rocky trails, through cavernous spaces and finally to the falls. We dove under the falls and jumped into the pools of an indescribable blue. Ian pointed out all types of flora and fauna along the way, educating us about this bountiful country. We will come back again and again and specifically use this tour company and hopefully Ian.

U9208CZkaren
Verified
Don't miss the La Leone Adventure Hike! I cannot recommend this guided hike enough. La Leone waterfall is one of the most beautiful places I have ever seen and our private guide from this company was just wonderful. He really went above and beyond to give us an amazing adventure. It was so much more than I even expected when I booked the hike. I loved that booking private allowed us to go at a much earlier time and so the trail was much less crowded. On our way out I noticed bigger groups coming through and I'm glad we'd been there early to enjoy a bit more solitude. We saw beautiful blue Morpho butterflies, bats, caves, waterfalls and the most gorgeous blue water. It was my favorite activity of our trip (and we did alot!)

Melissa V
Verified
Incredible Family Experience! We just had the most incredible day at La Leona Falls! Our family of 4, including 2 teens, spent the whole day there. Our enthusiastic, experienced and friendly tour guide Randall was the best!! First we hiked to the waterfall, which was challenging walking through rushing water, but such a great adventure. Then we were driven to Canon de la Viejo Lodge where we did the zip lining on 8 stations. Amazing views flying over the jungle and river! Our favorite next was tubing down the river. The ride was so fun because it included moderate rapids! We then had a nice lunch at the lovely restaurant on property. Our last activity was going to the hot springs which is located on a beautiful spot next to the river. There we were slathered in warm volcanic mud, rinsed off in the river and outdoor showers, and then relaxed in the 3 separate pools, each with different temps. This tour is well worth the trip if you are near Liberia. Fun was had by all!

Jeanette M
Verified
Amazing hike and waterfall Such an amazing and cool experience. We paid for the private tour and it was well worth it. From the hike to the cliff jumping to the waterfall itself, it was all so cool and amazing. Our tour guide John was super knowledgeable about the area, plants and trail. Made for such an amazing excursion. It was probably the best thing we did on our trip and highly recommend it!

Tanner P
Verified
Amazing Waterfall Tour with Outstanding Guides This was an experience of a lifetime for our party of 8, 4 adults and 4 teens. We are so glad we found La Leona Waterfall Adventure Tour. Our guides Jeremy and John were both wonderful. Ask for them!! They kept us entertained the whole time and you could tell how much they loved sharing this beautiful place with us, It was truly unbelievable. There were not many people on the trails to and from the waterfall so you really get to feel like it is your own private tour with no one else in all your pictures!! If you can add this adventure to your travel plan, it will be worth it!! Can not recommend it enough.

Raphaelle W
Verified
Fantastic excursion! The La Leona Waterfall Adventure Hike was the highlight of our vacation! If you're looking for a bit of adventure in a gorgeous setting, this is the trip for you. (Just make sure you pack water shoes.) The tour operators are well organized and our guides, Jeremy, Kevin, and Allan were very experienced and knowledgeable and made for a super fun excursion. Highly recommend this!

Lauren D
Verified
Great trip! This trip was SO FUN! The hike included jumping in bright blue pools, a little rock climbing, going through caves, and finally swimming through a beautiful canyon to a waterfall! Our guide, Vladimir, kept me and my kids (11 and 8) safe and kept us entertained with local history and information about the ecology of the area. Go! You won’t regret it!

Pipe Dream Charters
Verified
Waterfall We had a great guide who led us to the waterfall. The hike and waterfall are beautiful and definitely worth the trip.

Deanna ZG
Verified
Epic experience One of the highlights of our trip for sure! The adventure was incredible but Jeremy elevated the whole experience. He was so knowledgeable yet fun and got my 9 year old to loosen up and explore without any fear. Book private, it’s totally worth it and you won’t regret it for a moment. It’s simply A Cachete!!

Kimberly P
Verified
Amazing adventure We had an incredible time with Fabricio, Victor, Jeremy, John, and Joseph. We came with lots of young children and they made this hike so much fun! They made us feel safe while providing them with an incredible adventure. The end waterfall was spectacular. I couldn’t recommend enough! This hike is physically intense but was so worth it! The guides pointed out monkey, plants, and different insects to us along the way. Thank you for a great afternoon in Costa Rica. Pura Vida!
Tripadvisor rating score: 5 of 5, based on 178 reviews
Click here to Read Full Reviews on Trip Advisor

What are you waiting for to do this tour? We guarantee you it will be one of the highlights of your trip in Costa Rica.